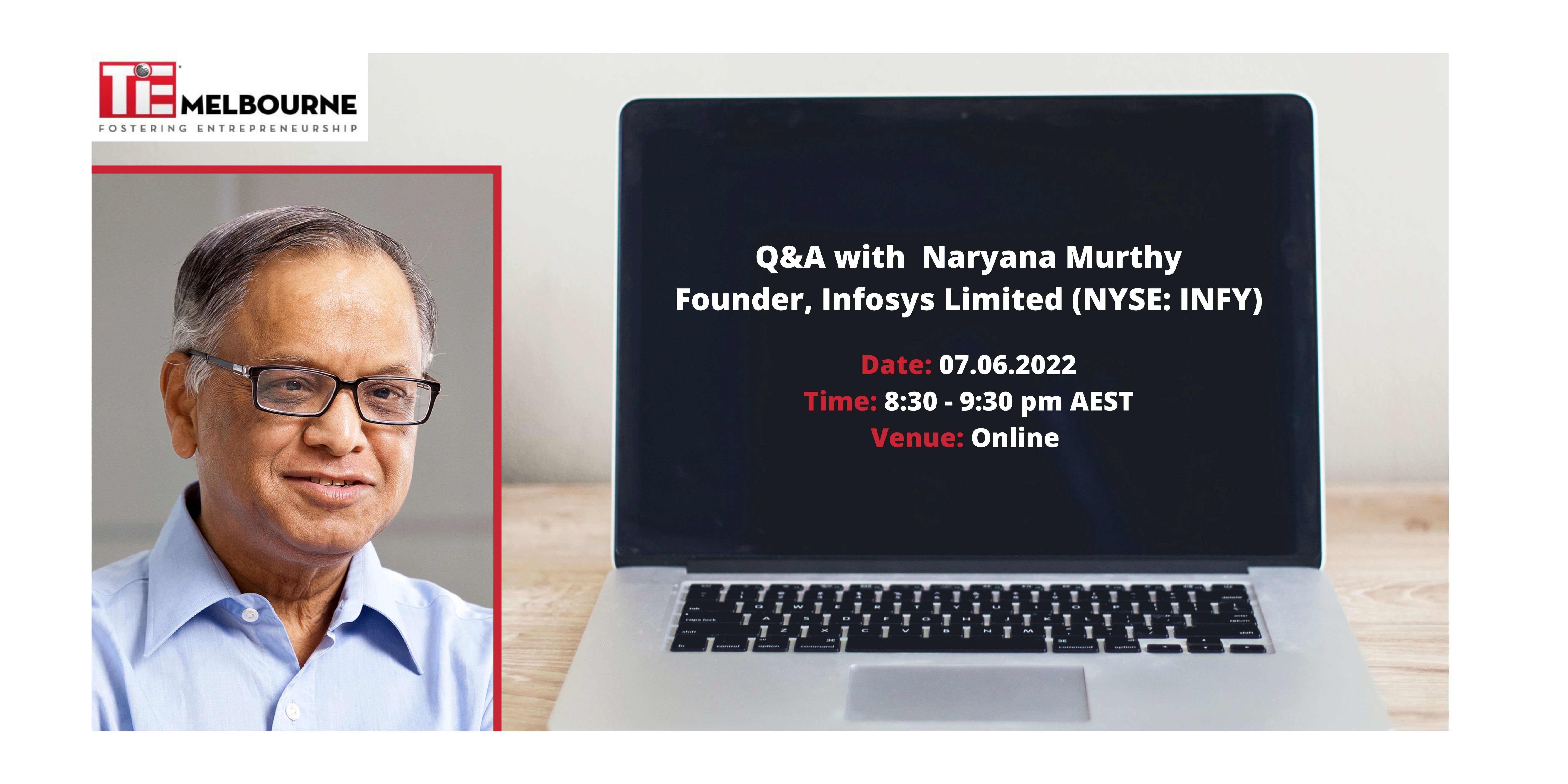 TiE Melbourne is proud and privileged to announce that it will be hosting a Question and Answer session with Mr Naryana Murthy in June 2022. Mr Murthy has been introduced to TiE Melbourne by Rajiv Dhar, a long term charter member of our chapter.

N.R. Naryana Murthy is the Founder of Infosys, a global software services company listed on the NYSE and the Bombay Stock Exchange. Mr. Murthy has been ranked 13th among CNBC’s 25 global business leaders. He has also been listed among the ‘12 greatest entrepreneurs of our time’, by Fortune in 2012. He has received a Legion d’honneur from France, CBE from Britain, and Padma Vibhushan from India.

Mr. Murthy founded Infosys in 1981. Infosys is, today, a highly-innovative software services global company listed on NYSE in the US and on the Bombay Stock Exchange in Mumbai with about US$ 16 billion in revenue and about US$ 84 billion (as on April 27, 2022) in market capitalization.

Mr. Murthy conceptualized, articulated and implemented the Global Delivery Model (GDM) which has become the backbone of the Indian software industry. GDM is based on collaborative distributed software development principles and has resulted in the delivery of superior quality software to global customers delivered on time and within budget. Mr. Murthy also introduced the concept of 24-hour work day to the world.

In 2014, Mr. Murthy was ranked 13 th among CNBC’s 25 global business leaders and listed among the ‘12 greatest entrepreneurs of our time’, by Fortune in 2012. He has received Legion d’honneur from France, CBE from Britain and Padma Vibhushan from India. The Economist ranked him among the 10 most-admired global business leaders in 2005. Mr. Murthy is ranked among the top 10 of the Financial Times’ list of “Business pioneers in technology”, published in March 2015. He is the first Indian winner of Ernst and Young’s World Entrepreneur of the Year award.
Mr. Murthy was elected as a member of the prestigious American Academy of Arts and Sciences in
2019. He is a foreign member of the US National Academy of Engineering and a Fellow of the Indian
National Academy of Engineering.  He received the Founders Medal in 2018, the Hoover medal in
2012 and the Ernst Weber Medal in 2007, all the three from IEEE. He has received Thomas Jefferson
medal and James C. Morgan Global Humanitarian Award.

He is a member of the advisory board of the University of Tokyo (Japan), ESSEC Business School
(France), IESE Business School (Spain) and Fundação Dom Cabral (FDC – Brazil). He is also a
member of the Board of Governors and Trustees of the Asian Institute of Management, Manila.
He has served as a member of the boards of various well-known universities in the US like Cornell
University, Wharton School, the Graduate School of Business at Stanford University and the Rhodes
Trust at Oxford. He was the Chairman of the Indian Institute of Management (Ahmedabad), the #1
business school in India, and the Public Health Foundation of India (PHFI).

He has also served on the international advisory boards of Yale University, University of Illinois at
Urbana-Champaign, William F. Achtmeyer Center for Global Leadership at the Tuck School of
Business, Singapore Management University INSEAD, Asian Institute of Technology (Bangkok), the
Indian School of Business (Hyderabad), and the International Institute of Information Technology,
Bangalore.

He is married. His wife, Sudha, is a well-known author. They have two children.