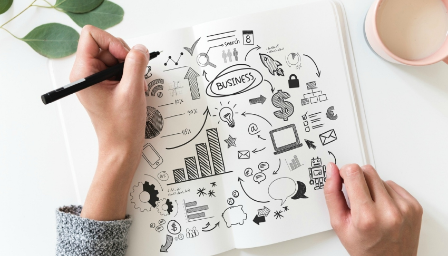 Designed for founders and leaders of companies from pre-revenue to $5 million, apply for this powerful one-day workshop to explore the fundamental needs for growing businesses. Gain insights and best practices from business leaders, advisors and investors of successful, high-growth companies. Topics to be covered include:

ICF, a global management, technology, and policy consulting firm headquartered in Fairfax, Virginia, has more than 60 offices throughout the Americas, Europe, and Asia, and over 5,000 employees serving clients in the public and private sectors. The firm is traded on the NASDAQ public market (ticker symbol: ICFI). Under Kesavanâ€™s leadership, ICF has become one of the worldâ€™s largest consulting firms specializing in two broad areas: energy and infrastructure, and health and social programs.

Ed Albrigo leads CIT in its mission to accelerate innovation commercialization, entrepreneurship and economic growth across the Commonwealth of Virginia.  He is responsible for overall strategic planning, financial management and employee engagement for the organization. He also leads outreach and collaboration activities with the business, education and government communities to devise ways to propel economic growth through innovation.

Jonathan Aberman is highly respected and valued thought leader on entrepreneurship and innovation. His work as a venture investor, innovation consultant, university professor and media commentator, allows him to experience and connect the many threads of entrepreneurship and technology innovation that are core to the United States economy and its future. He has been recognized by Washingtonian magazine as a â€œTech Titan,â€ by Washington Business Journal as a member of the â€œPower 100â€ and by the Commonwealth of Virginia as one of the â€œ50 Most Influential Entrepreneursâ€ in the Commonwealth.

Kendall Almerico is considered one of the top crowdfunding experts in the US. He was named one of the 20 most influential thought leaders on crowdfunding in the world by VentureBeat magazine and Inc. named Almerico to its list of â€œTop 19 Crowdfunding Experts Startups Need to Know.â€ Forbes called him â€œone of the top JOBS ACT and Regulation A lawyers in the country.â€ Almerico and his crowdfunding websites have appeared in the New York Times, USA Today, Washington Post, Washington Times, Huffington Post, Forbes, Bloomberg, Reuters, the New York Daily News, Business Insider, Christian Science Monitor, Fox Business Network and hundreds of newspaper, blog, radio and television interviews including CNN, CNBC, CBS, ABC, NBC, FOX, CCTV and Bloomberg TV. Mr. Almericoâ€™s law practice is focused on crowdfunding law, and particularly on equity crowdfunding through Regulation A+, Regulation CF and Regulation D, Section 506(c) private placements under the JOBS Act. Mr. Almerico is a regular crowdfunding columnist for Entrepreneur.com and a highly sought after international keynote speaker.

Bart is the Founder and CEO of the Jefferson Education Accelerator and Jefferson Education Fund. Bart spent the previous decade helping to build, run, and eventually sell the worldâ€™s largest online tutoring and homework help company -- Tutor.com.  Bart has mentored, coached, and advised hundreds of founders, CEOs, and executive teams through his previous work with the Business Alliance Grubstakes Breakfast, as a guest lecturer at the Georgetown University MBA program, as a mentor and judge for the Startup Weekend EDU program, as a corporate attorney at Latham & Watkins, and as a mentor for the GSVlabs, StartEd, and DreamIt accelerator programs.

Lax Gopisetty is a senior executive leader and entrepreneur with two decades of experience across a broad range of industries including insurance, healthcare, technology, manufacturing retail, telecom, financial services, media, and the public sector. He is an active evangelist, speaker, mentor, investor and blogger on disruptive innovation, business models, future ready enterprises leveraging modern technologies. He has worked with global fortune 1000 clients advising them on enterprise transformational initiatives, M&A, operational strategies and helping them to build sustainable businesses.

Vishal is the global leader for End-Point Management, Internet of Things (IoT) and Control and Compliance software portfolios and responsible for Engineering, Product Management, and Business Development for these exciting cyber security offerings. He is a seasoned engineering and business leader with a proven track record in both developing award winning products and in creating and growing a scalable business for those products.

Raj Khera is an engineer turned entrepreneur. After successfully exiting his company MailerMailer last year, he is focused on building small business portal, morebusiness.com. MoreBusiness.com helps entrepreneurs and small business owners start and grow their businesses with tutorials, templates, webinars and pre-written articles that can be licensed for blogs and other uses. Khera has built and sold several Internet companies including GovCon, the first portal for government contractors which he and his partners grew to be the largest web site of its kind before being acquired by a publicly traded company in 1999; FilterPoint, a spam filtering service acquired by InfoStructures in 2009; and DiscussThis, an email discussion group service acquired by SimpleLists (UK) in 2014.

UpsideDoor is committed to helping homeowners keep more of their equity when selling a home.  By focusing on how people shop for homes today, the company has reimagined the full-service brokerage experience, allowing them to pass thousands in savings on to customers.  The Virginia-based company has raised capital from prominent local angel investors, the CIT Gap Fund and Kiddar Capital.

Suresh has distinguished career as an engineer, serial entrepreneur and global philanthropist with expertise in marketing, business process automation, electronic document management, enterprise content management and mergers and acquisitions. He is the President for nonprofit WHEELS Global Foundation (WGF), an organization providing thought leadership in technology-enabled solutions in water, health, energy, education, lifestyle and sustainability. Suresh is an active supporter of the Capital IIT and Pan IIT alumni associations, and served as co-President of the PanIIT Alumni Association in North America. He recently completed two terms as Chairman of the National Capital region of the American Red Cross. He and his brother Sudhakar, were honored by the Northern Virginia Community Foundation for their leadership and contributions to Fairfax County. He received the Distinguished Service Award from his alma mater, the Indian Institute of Technology in Mumbai. He is on the adjunct faculty of the School of Information Technology & Engineering at George Mason University.

Amita Shukla
Founder & CEO
Vitamita
Amita Shukla is an innovator and entrepreneur focused on creating transformative innovations for human health, well-being, and potential. She is the author of Enduring Edge: Transforming How We Think, Create and Change. Previously, she spent close to nine years at New Enterprise Associates (NEA), one of the worldâ€™s largest and most active venture capital firms, where she evaluated cutting-edge medical innovations, invested in healthcare startups, and worked closely with world-class scientists, physicians, and entrepreneurs. Earlier, she was vice president of AmiKa Corp., a biomedical technology company where she helped develop and market novel research tools—for which she holds 10 issued patents—until its acquisition by Harvard Bioscience. Previously, she founded two startups and was a healthcare analyst at Merrill Lynch. She has written about innovation for publications such as the MIT Technology Review.

Gallop.ai is an AI-based assistant that makes business travel planning and booking frictionless. Tarun is a serial entrepreneur, previously co-founder of hCentive, GlobalLogic and Pinelabs. These three companies grew to more than $100M in valuation and experienced more than 100% year on year growth during his time with them.

Thinkster Math is an innovative AI augmented educational software platform that worsks across all devices and leverages human interaction with certified math instructors. In a very short time period, Thinkster Math has become the world leader in offering personalized tutoring program using innovating and patent pending technologies. Thinkster successfully combines the best aspects of man and machine to offer a superior learning experience for students across the world. With over seventeen years of experience, Raj previously served as chief of marketing and head of business development for WABCO Holdings Inc. and held leadership positions with Honeywell/AlliedSignal.

More to be announced!