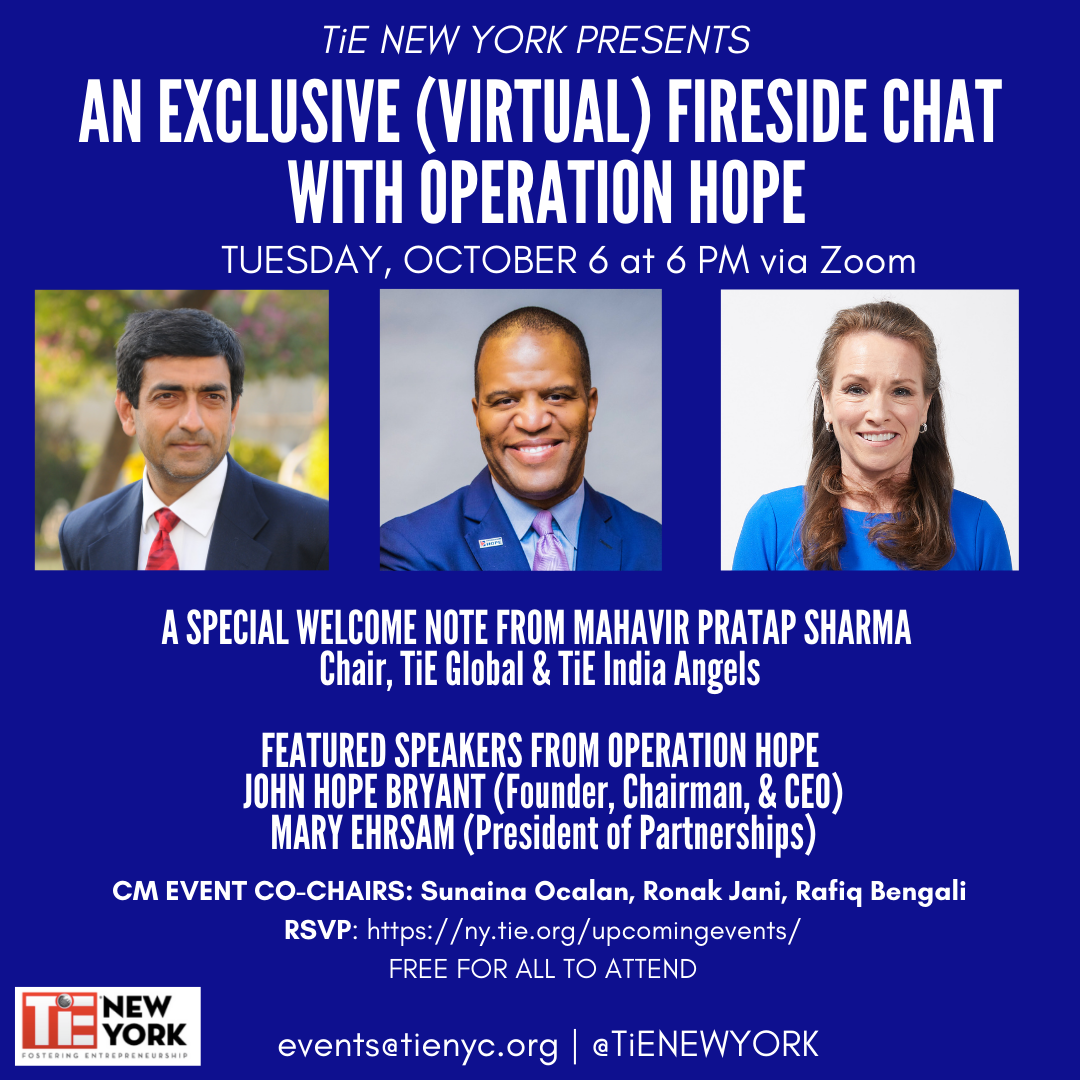 We hope you'll be able to join us for an evening of virtual fun, networking, and conversations. Our October Charter Member event will take place on Tuesday, October 6 at 6 PM via Zoom.

John Hope Bryant is the founder, chairman, and chief executive officer of Operation HOPE, Inc. the largest not- for-profit and best-in-class provider of financial literacy, financial inclusion and economic empowerment tools and services in the United States for youth and adults; chairman and chief executive officer of Bryant Group Ventures and The Promise Homes Company and co-founder of Global Dignity. As President of Operation HOPE Partnerships, Mary Ehrsam drives the cultivation of revenue streams and avenues for growth and sustainability while furthering the overall mission of HOPE. Mary is responsible for structuring development opportunities, oversight of partnership relations, and the execution of the scalability and sustainability strategy.  Prior to joining HOPE, Mary began her career in strategic economic development and poverty alleviation by launching the Los Angeles affiliate of Habitat for Humanity - growing the organization from a $35,000 budget to $3.2 million and constructing 64 homes in partnership with recipient homeowners. You can read more about the special guests below.

Normally at cost for guests and non-charter members, this event is FREE for all to attend. We're looking forward to seeing you. Reach out to Maggie Trabucco with any questions. Hope to see you there!

MORE ABOUT JOHN HOPE BRYANT: Named as one of Atlanta Business Chronicle’s “Most Admired CEOs” in 2018, American Banker magazine 2016 “Innovator of the Year”, Inc.’s “The World’s 10 Top CEOs” (honorable mention), and one of Time magazine’s “50 Leaders for the Future” named in 1994, John Hope Bryant is an American entrepreneur, author, philanthropist, and prominent thought leader on financial inclusion, economic empowerment and financial dignity. For the past two consecutive years, Bryant has been named in the "100 Most Influential Atlantans" listing developed by the Atlanta Business Chronicle that spotlights Atlanta’s top business and civic influencers. Operation HOPE is acknowledged as one of (No. 34) "Atlanta's 75 Largest Nonprofit Organizations", included in the 2017-2018 Book of Lists—a publication of the Atlanta Business Chronicle.

The last five U.S. presidents have recognized his work, and he has served as an advisor to the last three sitting U.S. presidents, from both political parties. He is responsible for financial literacy becoming the policy of the U.S. federal government. In January 2016 Bryant became the only private American citizen to inspire the renaming of a building on the White House campus, when the U.S. Treasury Annex Building was renamed the Freedman’s Bank Building. The Freedman’s Banks’, founded by President Abraham Lincoln, legacy has become the narrative of the work of Operation HOPE—to help all people in the ‘Invisible Class’ become fully integrated into our nation’s economy. In April 2017, a historical marker, also inspired by Bryant, to honor the final flight of Dr. Martin Luther King, Jr. to Memphis on April 3, 1968, was installed at the Memphis International Airport 49 years to the day that Eastern Flight 381 arrived from Atlanta. In May, 2019, Bryant received an invitation to be a regular guest co-host for CNBC SquawkBox.

A member of the founding class of The Forum of Young Global Leaders, and founding member of Clinton Global Initiative, Bryant is a LinkedIn Influencer, contributor to Huffington Post, THRIVE Global and Black Enterprise, and a member of the World Economic Forum and OECD Expert Networks. He has received hundreds of awards and citations for his work, including, Oprah Winfrey’s Use Your Life Award, and the John Sherman Award for Excellence in Financial Education from the U.S. Treasury. Bryant recently received an honorable mention in Inc. magazine’s “The World’s 10 Top CEOs” article that spotlights global servant leaders as the visionaries behind some of the most successful organizations. Additionally, Operation HOPE and Bryant are a permanent part of the Smithsonian AFRICAN-American Museum in DC. On April 15, 2019, the City of Atlanta City Council and the City of Atlanta (John’s home city) named April 15th John Hope Bryant Day. He is one of the only bestselling authors on economics and business leadership in the world today who happens to also be African-American.

MORE ABOUT MARY ERHSAM: Mary expanded her focus to comprehensive revitalization of underserved communities as Vice President, Chief of Operations for Operation HOPE. In her role Mary oversaw the development of the HOPE Financial Dignity Centers and was responsible for operations, legal, fiscal management, compliance, community and political affairs, and financial development. Mary is a 22-year member of the HOPE legacy team. She developed and launched the HOPE youth programs, expanded the HOPE Inside model nationwide, and led the global expansion in South Africa and the Middle East. Working with the Global Dignity Co-Founders, Mary developed the base “A Course in Dignity” curriculum that has since been delivered, in partnership with the World Economic Forum of Young Global Leaders, in 100 countries on four continents. She received a degree in economics from Gettysburg College, and currently serves on the boards of directors of Gettysburg College, Art & Soul, and the Gettysburg ESii. Mary is an advisor for the SaveThe Arts Foundation and a member of the ODE National Economics Society.

MORE ABOUT MAHAVIR SHARMA: Mahavir Sharma, a serial entrepreneur is part of umpteen businesses and social organizations and exudes passion in idea and early stage angel investing, leadership and mentoring. He is the current Chairman of TiE Global board of Trustees (www.tie.org), the first Asian to achieve that position. He is also the Chairman of TiE’s new initiative for investing in idea and early stage startups across India, the TiE India Angels (TIA) and also the Chairman and co-founder of Rajasthan Angels (RAIN- www.rainjaipur.co.in ) and has been a very active angel for early and idea stage companies for the last many years. A prolific speaker, who has had the honour of being the Chairman of the Carpet Export Promotion Council (CEPC- Under the aegis of the Ministry of Textiles, Government of India) and the privilege in the past to have been on TiE Global board for 7 years during which has chaired various committees and initiatives including being the Vice-Chair for the year 2019. In addition to be an active Angel investor he is also in the Business of Carpets, Jewellery, Marketing and Branding in a career spanning 30+ years. And in his philanthropic activities has been supporting the performing and visual arts of Rajasthan by leading in many non-profit initiatives for the last over 2 decades.