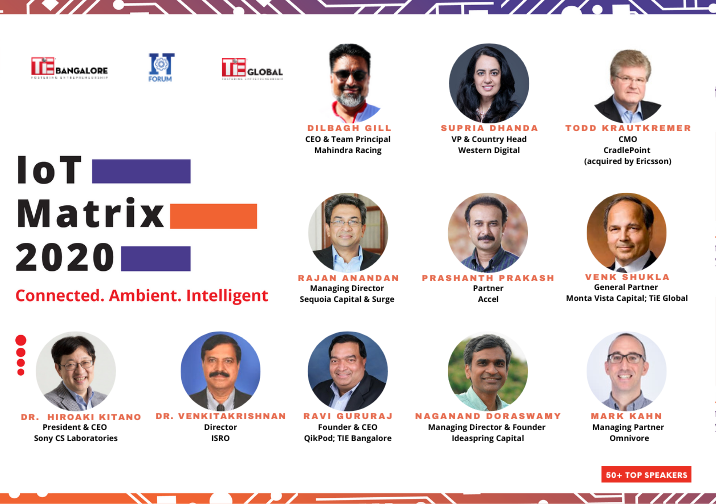 The objective of the annual conference IoT Matrix is to bring the entire innovation-led community together to debate and deliberate on the current developments on the ground and share what to expect in near future, discuss and debate the upcoming technologies and business trends, connect with global counterparts and showcase the most innovative startups from India.
Our journey began in 2015 and we are now the number #1 IoT conference from India with over 2,000 global participants.

In IoT Matrix 2020, we move forward from just the hyper-connected IoT world  - and see the confluence of multiple technologies that are starting to seemingly merge together creating a world of enchanted immersive experience where data holds the key!

Here is a glimpse:

IoT is making the physical/real world digital, while AR/VR is making the digital world accessible to us in the real world, creating a confluence with ‘Digital Twin’ and an ‘Enchanted Reality’. Both are being fed enormous amounts of data which is getting crunched and analyzed at the edge and on the cloud. AI and ML are pushing the limits of data aggregation, while data ownership, trust and privacy are questioning the same.

IoT Matrix 2020 is expected to host more than 2,000 delegates, 50 plus exhibitors, 100+ start-ups and  a number of high-profile policy makers from around the world.

TiE Global is a nonprofit organization started in 1992 and devoted to entrepreneurs in all industries, at all stages, from incubation, throughout the entrepreneurial lifecycle. With a global reach and a local focus, the heart of TiE efforts lies in its five foundational programs, – Mentoring, Networking, Education, Funding, and Incubation.

TiE Bangalore is a non-profit, global community welcoming entrepreneurs from all over the world. We believe in the power of ideas to change the face of entrepreneurship and growing business through our five pillars; mentoring, networking, education, incubating and funding. TiE was founded in 1992 by a group of successful entrepreneurs and is currently the world’s largest entrepreneurial organization out there. With programs like TiE Young Entrepreneurs (TYE) and Mentor Match, we are reaching out and fostering the next generation of entrepreneurs

IoTForum Think-Tank tracks 2000+ startups in the Internet of Things (IoT) and engages them with mentors, corporates, partners, and investors and evangelizing IoT use cases and best practices. It also organises regular monthly meets on varied topics of interest for the growing community. The think tank leads thought leadership initiatives with corporates, startups, industry bodies and government. Some areas of effort include startups assistance schemes from government of Karnataka, IoT Spectrum advocacy, IoT platform workshops, IoT Security policy and active directory of startups in the Internet of Things.