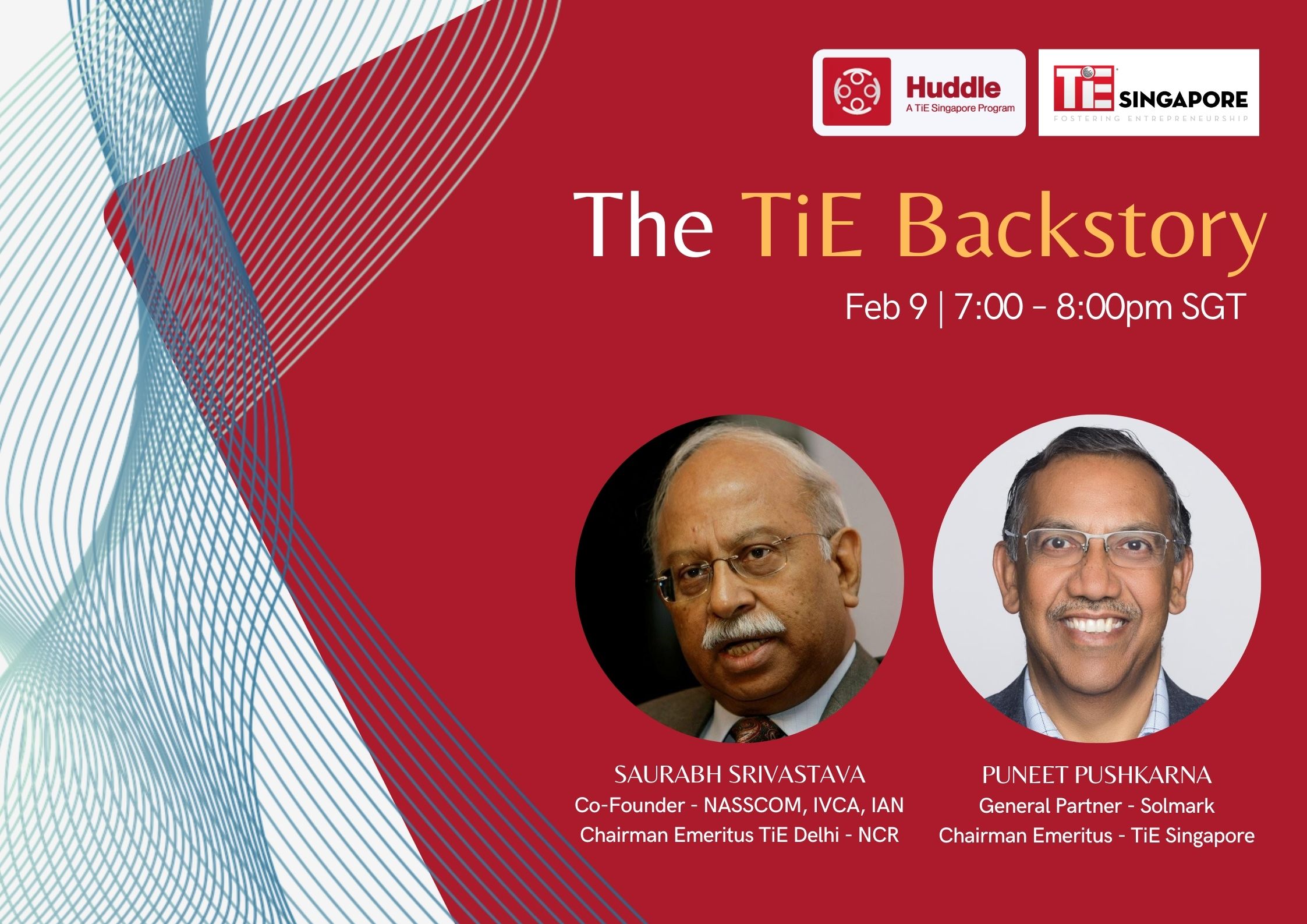 TiE Singapore is delighted to invite you to the upcoming Huddle session, "The TiE Backstory".

The session would cover:

o   The establishment of the Singapore TiE chapter

o   The role of entrepreneurs in society

o   The growth of the startup ecosystem

o   The role of angels and angel networks

Saurabh Srivastava is one of India’s leading entrepreneurs, investors and institution builders, widely acknowledged as one of the architects of the Indian IT Industry and as leading the creation of a vibrant entrepreneurial eco system in India. The President of India has awarded him the Padma Shri and Prime Minister Shri Narendra Modi has presented him an Award for contribution to the Indian IT Industry.

He co-founded and Chaired key institutions of modern India focussed on IT and entrepreneurship: NASSCOM; Indian Venture Capital Association; TiE Delhi-NCR ( also served on its global board); Indian Angel Network, India’s first and amongst the  world’s largest angel groups with over 200 portfolio companies, 500+ investor  members globally, operations in 8 locations, including London and Israel.

After a successful stint in the US and India with IBM, he headed Tata Unisys, before turning to entrepreneurship. He founded several successful IT companies including one which was ranked amongst the top 15 companies in India, was the first to get ISO 9001 ( before Infosys and TCS) and was listed, post merger, on the London Stock Exchange with revenues of $800 mill.

He also founded India’s first private sector VC Fund which created companies like India Bulls and Avendus. He has been involved in investing in around 100 start-ups and has personally mentored hundreds of entrepreneurs. He serves/has served on the boards of reputed public companies from the US, UK and India.

He served on the Advisory Board of Imperial College Business School London, was adjunct Professor of Entrepreneurship at IIT Mumbai, is Chairman of IIIT Naya Raipur and on the Board of Governors of IIT Kanpur.

He has a Masters from Harvard University, a B Tech from IIT Kanpur and was awarded an Honorary Doctorate in Technology by the University of Wolverhampton, UK. Other Awards include “Distinguished Alumnus Award” from IIT, the Data Quest Lifetime Achievement Award for IT and the Patrick J McGovern Lifetime Achievement Award for Entrepreneurship ( other awardees include Ratan Tata and Nandan Nilekani).

Puneet Pushkarna is currently General Partner of Solmark, a Private Equity fund formed by a group of tech entrepreneurs who have launched and built several companies and bring expertise in all aspects of growing a company in a competitive global marketplace. Solmark’s target portfolios include FinTech, Business Platforms, Cloud Technologies, Analytics, Data Management, MedTech and Customer Experience Management companies.

Prior to this, he was the President of Headstrong, a highly specialized deep-domain business in the Capital Markets that helped its customers through a strong process-centric digital technology services platform, leading to transformation in the front, middle and back office. Headstrong eventually got acquired by Genpact in 2011.

He was the co-founder of TechSpan, a Goldman Sachs backed design thinking and business solutions consulting organization, focused on e-business value chain management. TechSpan consistently ranked amongst the fastest growing companies in Silicon Valley. He was part of the founding team that helped grow HCL America into what is now HCL Technologies.

He sits on a number of Boards/Advisory Boards including:

• Chairman of Innoveo, a Zurich based InsureTech company

• Board of Governors, IIM Nagpur

• Industry Advisory Board of SP Jain School of Management

• Advisory Board of Ecosystm, a Digital Research Platform

• Advisory Board of Evolko, a cloud based EMR and Health Radar company

• Judge,  Innovators Under 35, a competition run by MIT Technology’s EmTech Asia to identify 20 of the most promising innovators in Asia.

He is involved with a number of philanthropic initiatives and is the Patron of IFA (Indian Foundation for the Arts), and is on the Management Committee of SIFAS (Singapore Indian Fine Arts Society).

Puneet has been involved with TiE (The Indus Entrepreneurs), one of the largest Entrepreneur networks in the world. He is the Chairman Emeritus of TiE Singapore, and was also a member of the Board of Trustees for TiE Global, the apex management body for all the TiE Chapters in over 60 countries in the world.