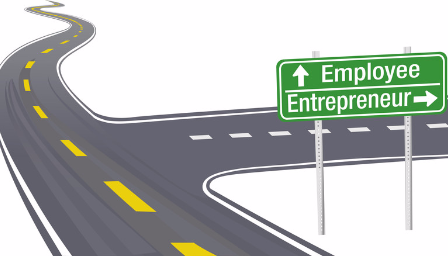 Employee to an Entrepreneur

Are you currently an employee working at a large/medium/small company and struggling to switch to be an entrepreneur? You have a passion to be an entrepreneur, but not able to get out of your routine 9 to 5 job? If answer is yes, come join this panel session to learn from employees like you that became successful entrepreneurs.

Becoming a successful entrepreneur takes more than a great idea and important connections (although both do help). Making the shift from the steady life of a full-time employee to the unpredictable world of entrepreneurship requires a shift in mindset that many overlook. In fact, some of the work habits that you so carefully honed as a good employee donâ€™t necessarily translate well into the world of an entrepreneur.

Our distinguished panelist includes following proven entrepreneurs from Triangle area who have created and sold companies for multi-million dollars. Before starting their entrepreneurial journey, these panelists were like you i.e. employees of large and or small companies in Triangle area.

Michael DeHaan is a North Carolina native and NCSU alumni who created and founded the popular open automation framework Ansible.  In a very short time, Ansible grew to be one of the Top 100 most popular projects on GitHub, attracting over 1000 code contributors, and is arguably the most popular configuration management system in the world. In 2015, only a few years after the project started, Ansible was sold to Red Hat, estimated to be one of the Triangle's Top 10 software exits according to Exit Event.

Amit co-founded Spectraforce Technologies Inc in 2004. Spectraforce is a global IT consulting, workforce solutions and IT outsourcing services firm with CHQ in Raleigh NC, and 11 offices/development centers across US, India and Jamaica. Amit serves as the President and CEO of Spectraforce. Amit moved from India to United States in 1997 with a large global IT services firm, Syntel Inc, While at Syntel, Amit served as a delivery/solutions manager and was involved in consulting, structuring and management of IT deals/projects in an integrated onsite-offshore delivery model that created exceptional value for large fortune 1000 clientele.

Following are some of Amit’s achievements:

Following are some of Amit’s professional and Civic Memberships:

Board of Advisors for the Frank Hawkins Kenan Institute of Private Enterprise at the University of North Carolina; Past Board of Directors for the Raleigh Chamber of Commerce; Past Business Board of Visitors for the North Carolina Central University School of Business, Chair - Technology Committee; Strategic Advisory Board for KnowledgeWell, a not-for-profit organization; Advisor, Cherokee Challenge. Amit also works closely with the entrepreneurial community locally and globally and works with various programs at UNC, NC STATE, TYE (The young Indus Entrepreneurs), Symbion (Denmark) and is involved in mentoring and coaching entrepreneurs, MBAs, undergrads, BSBAs and executive students in developing and launching their businesses and careers.

Erik Burckart is the CEO of Raleigh startup Monkey Bread Technologies while acting as a strategic advisor to 9 different startups. Erik graduated from the University of Pittsburgh and started working directly with IBM.  He had a very successful 12 year career at IBM that had him providing technical guidance to an organization that had over $1billion of revenue by the age of 28. He spent most of his time in the WebSphere Application Server product as a lead architect and then shifted over to the Commerce realm helping to orchestrate the $1.4B acquisition of Sterling Commerce and about 15 other acquisitions across IBM.  In his time at IBM, Erik filed over 100 patents and was named a Master Inventor and NC Inventor of the year as well as earning many other exclusive awards.

Erik left IBM to try his hand in the startup realm in 2012.  Erik bought in as one of three partners in PointSource, a small application development consultancy with under 10 US employees.  He pivoted the company to primarily onshore resources developing mobile and digital transformation solutions.  Erik led the company to grow their revenues over 6X in 4 years and their US employee base to over 90 which led to their sale in June of 2017 to Globant.  He received awards such as Triangle Business Journal's 40 under 40 and CIO of the Year for Innovation and Transformation while at PointSource.  PointSource was consistently in the Inc 5000 list of Fastest Growing Companies and the Deloitte’s Technology Fast 500 while having a culture that won several awards. Throughout his IBM and PointSource experience, Erik has consulted with many Fortune 500 companies such as Anthem, American Airlines, American Express, Allstate, Bank of America, Bass Pro, Dick’s Sporting Goods, Finish Line, Lowe’s, Marriott, Southwest Airlines and Target as they each built out new digital solutions. Erik is a constant innovator which is often recognized and appreciated by his clients regardless of their size.

Now Erik has started his latest venture, Monkey Bread Technologies.  Based in Raleigh, Monkey Bread Technologies builds custom mobile and digital software through its consulting arm Kapok Digital while building and investing in several startups.  Monkey Bread Technologies delivered a wholly owned Software-as-a-Service product called Hoptree earlier this year which helps small businesses or local stores text with their clients. Meanwhile, Monkey Bread Technologies is currently an investor and technology partner across 6 other startups. Outside of work, Erik has been married for 14 years to Heather and together they have 4 children ages 3 to 10 years old. Two of those children were born while at IBM and two since he has become an entrepreneur. They are very active in their local church and also work with many nonprofits.  Erik sits on the board of Your Centerpeace, an educational nonprofit which aims to support marriage and keep families whole.

Employee to an Entrepreneur