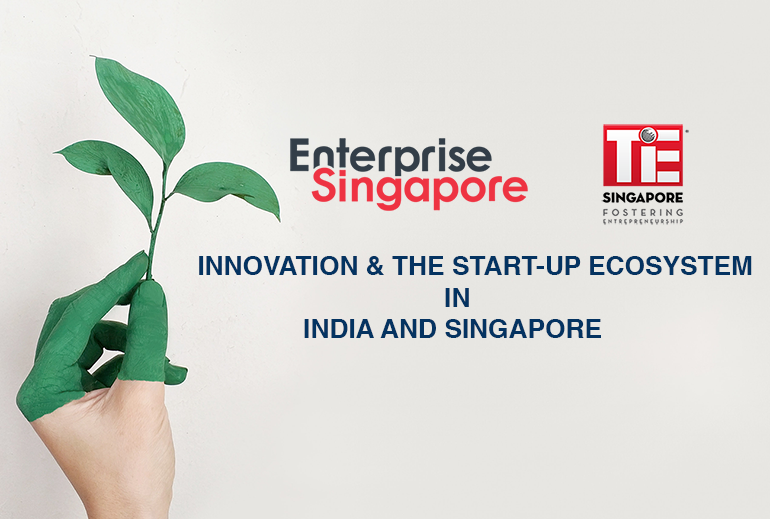 DISCUSSION ON INNOVATION & THE START-UP ECOSYSTEM IN IND...

"India has the 2nd largest startup ecosystem in the world;  20,000+ startups  with around $50Bn in valuation"

So what are the trends affecting this ecosystem? How can a Singapore based startup expand into this region? What are the key sectors dominating in the near future?

Mohan is the co-founder and Chairman of Aarin Capital, an Investment fund that invests in Startups and Funds that focus on innovation in technology, education, health care, and life sciences. He has helped launch over 14 different investment vehicles which have cumulatively invested in over 280 companies with investment of +$450 Million. Mohan is also an Investment Committee Member of 3one4 Capital, an early-stage venture capital fund managing INR 750 Cr ($100 Million). He has worked with the Government of India to bring in a Startup Policy for the country, and the Governments of Karnataka, and Rajasthan on their respective Startup Policies for innovation and entrepreneurship. Mohan was also an Investment Committee Member of the SIDBI India Aspiration Fund and the India Fund of Funds which has a corpus of $1.8 Billion. His family office has invested in over 37 different investment vehicles in India, US, Israel and Singapore and helped grow the startup ecosystem in India. He is consistently named as one of India’s top investors in this field.

Until 2011, Mohan was a Member of the Board at Infosys Ltd., one of India’s largest software services companies. Mohan joined Infosys in 1994 and was CFO from 1994 to 2006.  He was voted ’CFO of the Year’ multiple times - ‘CFO of the Year’ in 2001 by IMA India, the ‘Best CFO in India’ award from Finance Asia in 2002, and ‘Best Chief Financial Officer in India’ by Asia Money in 2004. At Infosys, he also spearheaded the first listing of an India-registered company on NASDAQ and the first sponsored secondary offering of American Depositary Shares by an Indian company. Under his supervision, Infosys’ annual report won the Best Presented Annual Accounts Award from the Institute of Chartered Accountants of India for 10 years in succession as well as the award from the South Asian Federation of Accountants. As CFO of Infosys, Mohan led efforts to set standards in India for financial reporting and disclosure, corporate governance, investor protection, overseas listing, foreign exchange regulations, overseas investments, quarterly reporting and investor relations, most of which are now embedded in listing regulations. He is widely regarded as a thought leader in these areas.

In 2006, he voluntarily relinquished the role to lead Human Resources, and Education & Research. He was also responsible for the Infosys Leadership Institute, Administration, and Infrastructure.

Mohan was also Chairman of the Board of Infosys BPO Limited, a leading business process outsourcing services provider, for seven years. Additionally, the core banking software FinacleSM and Platform Group business units reported to him.

Mohan actively interfaces with key leadership in Indian governments and regulators to improve the business ecosystem. He served on the Board of the Securities and Exchange Board of India (“SEBI”) and is now the Chairman of SEBI Primary Markets Advisory Committee (“PMAC”) and the SEBI Regulatory and Financial Technology Committee. Mohan was a Trustee of the International Financial Reporting Standards (“IFRS”) Foundation, the body that oversees the International Accounting Standards Board (“IASB”), for six years. Mohan was also Chairman of the FICCI Skills Committee, the FICCI Higher Education Committee and President of the All India Management Association. He served on the Boards of IIT’s – Bhubaneswar and Hyderabad. Mohan was a member of the Kelkar Committee, constituted by the Ministry of Finance, Government of India for reforming direct taxes, the Non-Resident Taxation Committee and the High-Powered Committee on e-Commerce and Taxation. He was the Chairman of a High-Powered Committee to define the IT Roadmap of the Central Board of Excise and Customs, named “DRISHTI”, for an IT-driven transformation in the Indirect Tax Administration. Mohan was also the Chairman of the Karnataka ICT Group 2020, Chairman of the Karnataka Tourism Vision Group, and a member of the Karnataka Knowledge Commission.

Mohan is currently the Chairman of Aarin Capital, Chairman of Manipal Global Education, a Member of the Board of Havells India, of Ascendas Property Fund Trustee, the Trustee-Manager of Ascendas India Trust, The National Stock Exchange Ltd., and the Institute of Public Enterprises,

Mohan has a keen interest in education, health, policy, heritage conservation, philanthropy, and civic engagement. In 2000, he co-founded the Akshaya Patra Foundation, Bangalore - a mid-day meal program for school children. Today, this program feeds over 1.7 million children each day in 13,500+ government schools across thirteen Indian states. The mid-day meal program stands out as an exemplary private-public partnership program and has served over 3 Billion meals so far. The program has been awarded the Gandhi Peace Prize by the President of India in 2019. It aims to feed 5 Million children daily by 2025 and is currently the largest mid-day meal program in the world.

He was awarded the Padma Shri by the President of India in 2015 and the Karnataka Rajyotsava Award in 2004. Mohan holds a bachelor’s degree in commerce as a University Rank Holder from St. Joseph’s College of Commerce, Bangalore, a bachelor’s degree in law (LLB) from Bangalore University, and is a Fellow Member of the Institute of Chartered Accountants of India as an All-India Rank Holder. He is based in Bangalore, India.

Discussion on Innovation and Startup Ecosystem in  India and Singapore

Puneet Pushkarna is currently General Partner of Solmark, a Private Equity fund formed by a group of tech entrepreneurs who have launched and built several companies and bring expertise in all aspects of growing a company in a competitive global marketplace. Solmark’s target portfolios include FinTech, Business Platforms, Cloud Technologies, Analytics, Data Management, MedTech and Customer Experience Management firms.

Prior to this, he was the President of Headstrong, a highly specialized deep-domain business in the Capital Markets that helped its customers through a strong process-centric digital technology services platform, leading to transformation in the front, middle and back office. Headstrong eventually got acquired by Genpact in 2011.

He was also the co-founder of TechSpan, a Goldman Sachs backed design thinking and business solutions consulting organization, focused on e-business value chain management enterprise. Techspan consistently ranked as amongst the fastest growing companies in Silicon Valley. He was also part of the founding team that helped grow HCL America into what is now HCL Technologies.

He sits on a number of Boards/Advisory Boards including:

Puneet is a Charter Member of The Indus Entrepreneurs (TiE) from its early days in the Silicon Valley and serves as its Chairman of the Singapore chapter and is also a member of the Global Board of Trustees for TiE Global.

He is also involved with a number of philanthropic initiatives like the Indian Foundation for the Arts, South Asian Heart Center, etc.

Mr Pande has over three decades of experiences in senior positions with ANZ Banking Group and Tata Consultancy Services (TCS) Ltd, a global IT company where he spent the last 11 years. In his last role as Chairman of TCS, Mr. Pande grew its APAC business from scratch to over 11,000 associates in 14 countries. Mr. Pande was also Vice Chairman of TCS’ joint-venture with the Chinese Government and instrumental in building the business to over 2,500 associates in six cities in China.

Mr. Pande served as Economic Advisor to the Mayor of Guangzhou. He was council member for the Singapore Government’s high powered Manpower Council set up by the Infocom Development Authority and served on the Advisory Board of Singapore Management University, the boards of Singapore International Chamber of Commerce, Institute of South Asian Studies-part of NUS.He serves on many major Technology company Boards in Asia- some of which are listed.

He received the best CEO Award from Singapore HR Institute & 2 Social Services Award by Ministry of Social& Family Development. He serves on Boards of National Council of Social Services, Serves as a Trustee of SINDA & National Healthcare Group in Singapore.

He has co-authored a successful book on building business in China & India- 'The Silk Road Rediscovered' published by John Wiley.

Mr Shamir Rahim is the Founder and CEO of VersaFleet Pte Ltd, served on the Future City sub-committee of the Committee for Future Economy, and is a member of the National Integration Working Group Community at MCCY. He also serves as President for the Singapore Malay Chamber of Commerce & Industry, and was previously Director on the board of Association of Muslim Professionals.

Mr Shamir received the SMCCI Young Entrepreneur Award in 2016. He graduated in molecular biology as a University Scholar and holds a Master of Science from the National University of Singapore. He was on the NUS Overseas College program at the Wharton School at the University of Pennsylvania.

DISCUSSION ON INNOVATION & THE START-UP ECOSYSTEM IN INDIA AND SINGAPORE