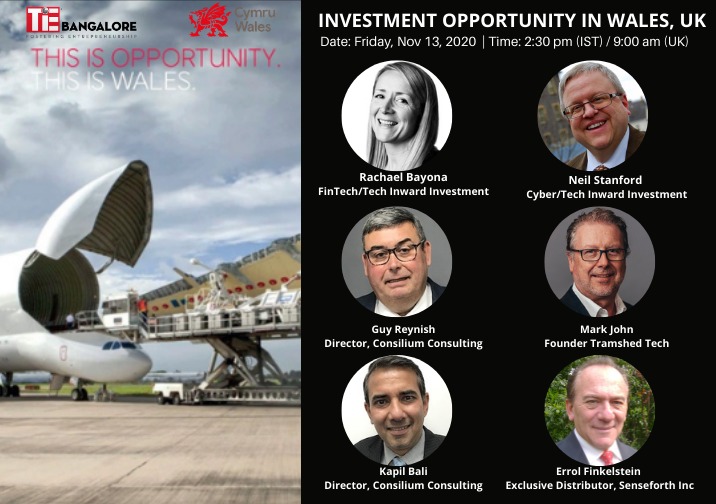 Investment Opportunity with the Welsh Government

The Session will have speakers including Welsh Government Officials and industry experts from Senseforth AI, Tramshed Tech and Consillium Consulting.

Rachael’s primary role focuses on Foreign Direct Investment (FDI) - working to attract FinTech / Tech companies to Wales, and supporting them through the process. Wales has a thriving FinTech ecosystem and Rachael works closely with businesses, academia and industry leaders to support businesses expanding to Wales.  Having spent 8 years leading international marketing campaigns for Visit Wales, Rachael is equally as passionate about promoting the quality of life that Wales offers in addition to the business benefits.  Prior to joining the Welsh Government, Rachael worked in the Financial Services Sector in various marketing roles including at Lloyds Banking Group.

Neil’s primary role focuses on Foreign Direct Investment (FDI) - working to attract Cyber / Tech companies to Wales.  Previously a Welsh Government Innovation Specialist and the Relationship Manager for a number of strategically important high growth SMEs and global tech companies including British Telecommunications (BT), defense giant General Dynamics (GD), and aerospace / cyber leaders, Airbus.  Prior to joining the Welsh Government, Neil worked at the Welsh Development Agency (WDA) in rural mid-Wales and has been the owner/director of a number of tech companies.

Tramshed Tech is a Grade-II listed former Tram depot in Central Cardiff. Tramshed Tech is a collaborative space where start-ups, scale-ups, and enterprises come to work, collaborate, and innovate. With flexible breakout areas, offices, and unmissable events, we are focused on bringing together people to do great things. ‍ Senseforth AI –  Senseforth AI has recently invested in Wales (Awaiting profile)

Consilium is a Business Advisory firm based in Cardiff, Wales. They advise and assist overseas companies all aspects of setting up a business in Wales and the wider UK. Consilum is also an Authorised Endorsing Body of the UK Home Office and is responsible for vetting and endorsing business ideas and plans for the Tier 1 Innovator Visa category of the UK Home Office. The Tier 1 Innovator Visa is ideal for entrepreneurs planning to move to and set up tech powered businesses in Wales, UK.

Errol is an IT and Finance Veteran. He was the youngest GM at brewer SAB Miller where he was responsible for marketing strategy; and later Board Audit Committee chair of United Breweries of India’s South African subsidiary, United National Sorghum Breweries. He served as CEO of MasterCard SmartLink and Group Managing Director of Seeff Holdings leading its successful IPO on the Johannesburg Stock Exchange.

He is the Founder/co-founder of a number of startups in smartphone data security and mobile phone base residential security applications, automation & large building systems. Errol has lived and worked for long periods in South Africa, the UK and the USA. He is the immediate past Honorary Chair of UNESCO’s Western Cape Biosphere Reserves non-profit company and former Honorary Founder Chair, UNESCO Garden Route Biosphere Reserve.

Presently, he is an exclusive Distributor of Senseforth, Inc for the UK, Europe and Africa, based in Cardiff, Wales.