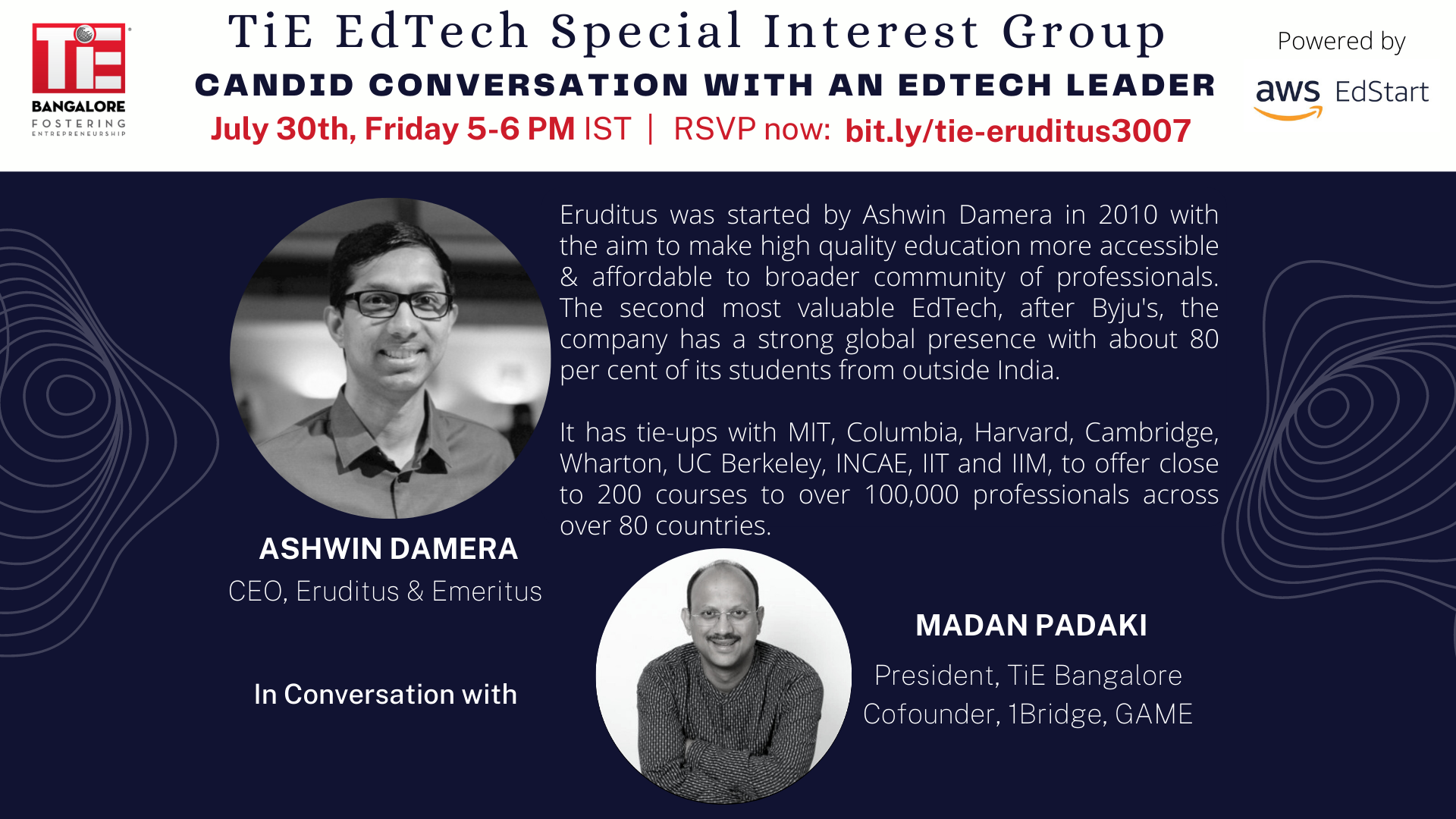 After a hugely successful TiE SIG Launch Event, with 450+ Attendees (join EdTech SIG community) participating live with Byju Raveendran, we are trilled to announce our next Edu-preneur rockstar - Ashwin Damera, Founder of Eruditus & Emeritus. If you missed the earlier Fireside Chat with the founder of India's most valuable startup - Byju's here's the video.

Ashwin is a Co-Founder & serves as Chief Executive Officer and Board Member at Eruditus Executive Education. Ashwin Damera served as the Founder and CEO at Travelguru. Mr. Ashwin, with his considerable experience in the e-world, is a key force in the overall strategic direction of Eruditus. Having worked with Citibank in India and a brief internship for Dave Barger (current CEO JetBlue Airways), he left the corporate setting and went on to become the founder and CEO of Travelguru.com, one of the most popular Indian travel websites. He is an MBA from Harvard Business School and is also a qualified Chartered Accountant. When he has some free time, he enjoys interacting with entrepreneurs and working on new ventures.

Eruditus came about in 2010 with the aim to make high quality education more accessible and affordable to a broader community of professionals. The idea was to use curriculum innovation, technology and pricing to open up access to Ivy league education.

CEO Ashwin Damera was able to convince his co-founder, Chaitanya Kalipatnapu, who at the time worked at INSEAD in executive education and Eruditus was born. In the one decade of its operations, the company claims to have partnered with over 30 reputable academic institutions, including the likes of MIT, Columbia, Harvard, Cambridge, Wharton, UC Berkeley, INCAE, IIT and IIM, to offer close to 200 courses to over 100,000 professionals across over 80 countries.

Eruditus has a strong global presence with about 80 per cent of its students from outside India. It has tie-ups with universities in China, SE Asia, Australia, Latin American, US and Europe offering courses in English, Spanish, Portuguese and Mandarin.

The company recently had broken even, in Q4 of 2020/21 and may well be the second most valued EdTech after Byju’s. Join us for what would be a candid conversation between TiE Bangalore President, Madan Padaki, and the entrepreneur Ashwin Damera.