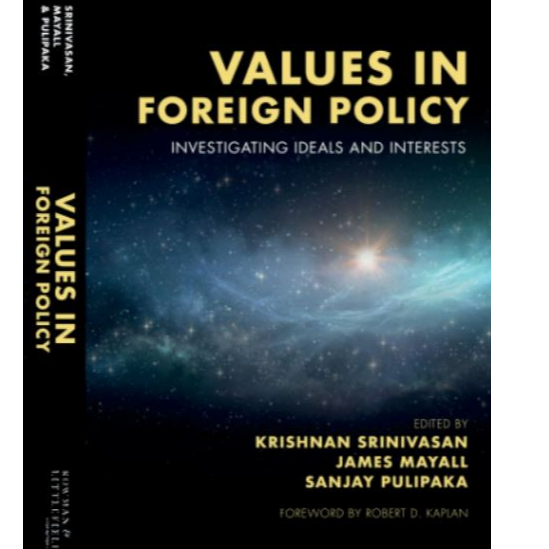 The programme will present the newly published book ‘Values in Foreign Policy: Investigating Ideals and Interests’ co-edited by Krishnan Srinivasan and James Mayall with Sanjay Pulipaka.

The book covers all aspects of the tension between values and national priorities, with specific reference to the leading countries of today. The volume explores the effect of the Enlightenment, colonialism, modernity and post-modernity in determining contemporary value systems which are often uncomfortable in their interface with each other. This book, written in accessible language, will be of interest and benefit to policy-makers and practitioners of foreign policy, as well as the academic community and will be equally valuable to anyone interested in international relations. Written by specialists in the field of foreign relations, this is the closest examination ever made of the impulses which drive the foreign policies of the world’s most important countries, touching on the legacies of religion, civilization, culture and history.

Krishnan Srinivasan is a former Indian Foreign Secretary and Commonwealth Deputy Secretary-General. He has been a visiting fellow at Cambridge, Leiden and Uppsala and has published several books on diplomacy and international relations.

James Mayall is Emeritus Professor of International Relations at Cambridge University and a Fellow of the British Academy. He has been widely published on the impact of nationalism on international relations, the theory of international society and North-South relations.